Nikita Malik was on Sky News at 7 to discuss the appeal of the Islamic State for female jihadists, on behalf of the Quilliam Foundation.

Malik was live on CNN’s New Day to discuss the rise of IS fighters and the circumstances behind Kayla Mueller’s death. 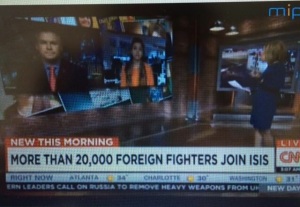 While law enforcement should have the appropriate tools to investigate, disrupt and prosecute cyber criminals, it is equally important to couple current and future regulation on surveillance with monitoring the use of the Internet by IS and other extremist organisations to spread unwanted and potentially dangerous ideologies and narratives internationally.

Recent comments by ex-MI5 chief Eliza Manningham-Buller that Blair’s anti-jihadist program has failed reveal that counter-radicalisation has to be led by both moderate Muslims and the state. Quilliam’s focus on challenging extremism of all kinds recognises that the shape of terrorism is less important than its component roots, writes Nikita Malik for Left Foot Forward.

What to make of the ISIS caliphate?

Quoted in Middle East Policy, Nikita Malik underscores the importance of cooperation among the various actors in the Middle East region. In particular, Israel, the United States, and Jordan are keen on keeping the ISIS influence from reaching into Jordan.

For Jordanian forces, the careful monitoring of shared borders remains a necessary externality resulting from the Syrian civil war, writes Nikita Malik for the Carnegie Endowment for International Peace.  The main threat of manning the 370-kilometer Jordanian-Syrian border lies in identifying suspected jihadist sympathizers and terrorists.

Jordan’s lower house of parliament recently passed amendments to its 2006 anti-terror bill, providing the state the power to detain and try citizens suspected of affiliation with terrorist groups. The amendments of the bill have been controversial, however. 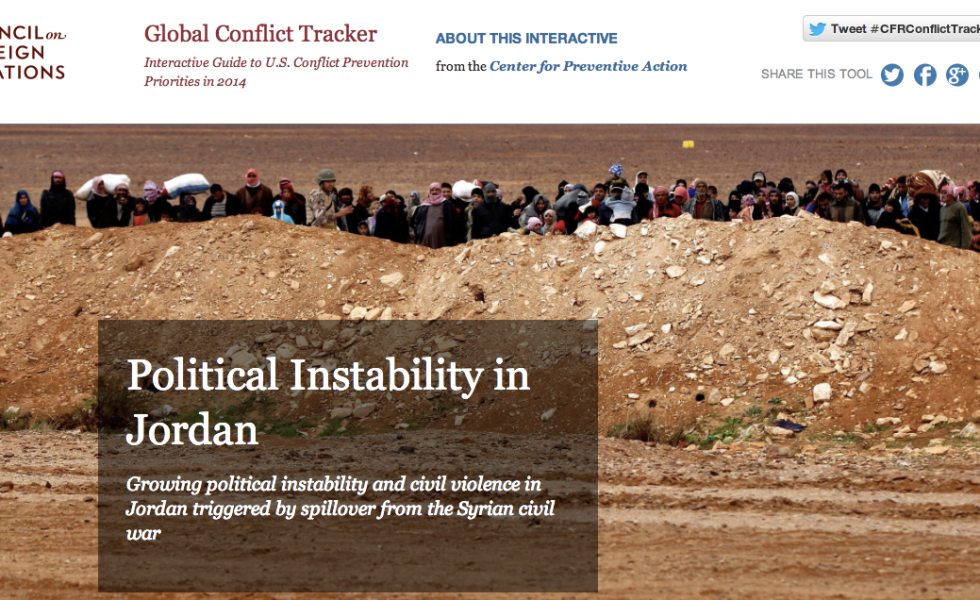 Nikita Malik was cited in the CFR’s Global Conflict Tracker, an interactive guide to U.S. conflict prevention priorities in 2014.

Political instability in Jordan, caused by the spillover effect of the Syrian civil war, was predicted by the Centre of Preventative Action as being highly likely to occur in 2014. This conflict was perceived as having a moderate impact on US interests.

The resulting and likely ‘spillover effect’ was a phenomenon first identified by Malik in February 2014 within a piece written for the Carnegie Endowment for International Peace: available to read here.

The CFR’s Global Conflict Tracker 2014 and its analysis on instability in Jordan can be found here. Jordanians split over the War in Syria

Painting Jordanians as [Syrian] rebel allies with a broad brush would be too simplistic: rather, popular opinion in the Hashemite Kingdom is divided. Many Jordanians do support the insurgency against Syrian President Bashar al-Assad, but some oppose it and many others have grown skeptical over time, as the spillover from Syria to Jordan increases, writes Nikita Malik for the Carnegie Endowment. 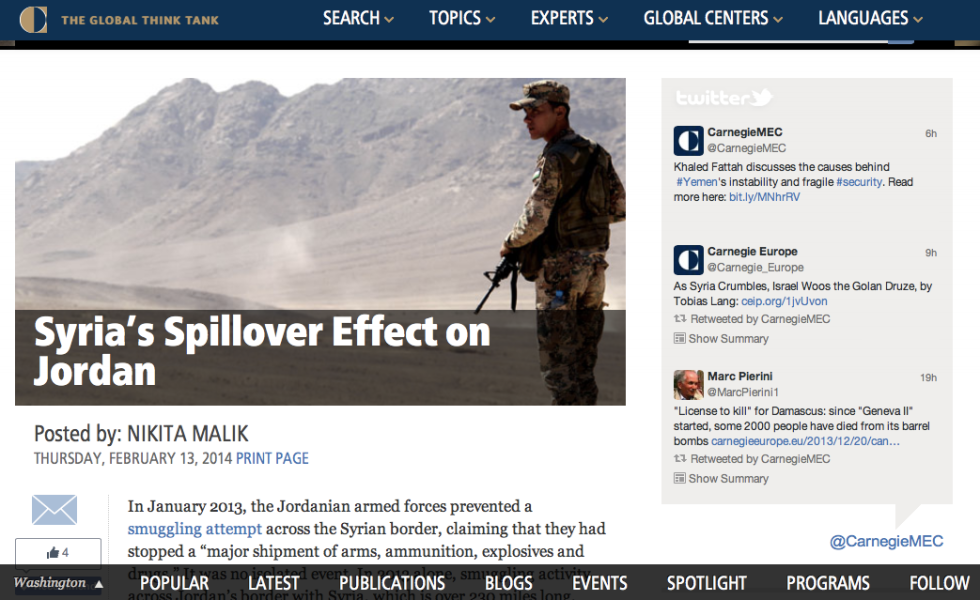 In January 2013, the Jordanian armed forces prevented a smuggling attempt across the Syrian border, claiming that they had stopped a “major shipment of arms, ammunition, explosives and drugs.” It was no isolated event. In 2013 alone, smuggling activity across Jordan’s border with Syria, which is over 230 miles long, increased by more than 300 percent.

The impact of Syria’s crisis on Jordan, its smaller southern neighbor, has been most clearly seen in the form of a massive influx of Syrian refugees, now numbering some 600,000 people. But there are other, less visible, consequences that also contribute to the erosion of Jordan’s internal stability.

This is a preview. Click here for the full article.

The Cost of Syrian Refugees

How Syrian refugees are impacting Jordan’s domestic balance of power, by Nikita Malik on Sada.

Sada is an online journal rooted in the Carnegie Endowment for International Peace. The journal seeks to foster and enrich debate about key political, economic, and social issues in the Arab world and provides a venue for new and established voices to deliver reflective analysis on these issues.